These three individuals are running for office again, after wasting taxpayer dollars, committing what state law describes as “felony records destruction”, and using payroll fraud to support cronies. They work with alt-right groups like the “Watchdogs” and people like Dick Barr and Doug Kearney and Sam Yingling.

This ain’t Hollywood folks, so sometimes the bad guys do win. We will track all of the felonies fraud, brazen lies and other reprehensible behaviors, and report it here.

Click here for more on Ancel Glink’s republican lawer named Keri-Lynn Krafthefer. she has a long history of bilking dim witted local government officials out of hundred’s of thousands in tax payer dollars. This is just one township where she encouraged board members to violate the law so she could pile up legal bills, there are lots more examples out there. $313,000 in this case. You won’t be surprised to learn that she has been working for Avon Township for the last tumultuous year where she attempted the same thing but was only able to sucker the board into $100,00 in wasted legal fees.

Click Here for more information on the alt-right “Watchdogs” group. And Here, and Here 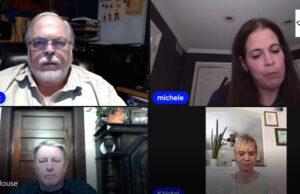 Here’s  a picture of Michelle Bauman and Krystal Larson working with the Alt-right founders of Edgar County Watchdogs. Apparently Jeanne Kearby thought better of her decision to be in bed with these type of people and asked to have her video taken down. However we found a copy on an old server here. 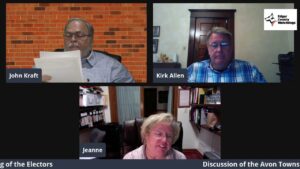 Click here to find out even more about other groups just like the Watchdogs and how, and why, they pretend to be journalists.

The State Board of Elections judge throws out Michele Bauman’s objections “clearly an attempt to deny the voters their right to pick their own candidate”. Also Sam Yingling’s campaign workers continue to be employed at the Township at tax payers expense, meanwhile the Township’s budget continues to collapse under mismanagement and incompetence.  And the Edgar Co. “Watchdogs” continue their smear campaign against Democratic candidate Terry Wilke, proving yet again, they are anything but journalists. The Edgar Co. “Watchdogs” continue to ignore a federal court’s subpoena which would show who pays them for their service of smearing candidates.

Sam Yingling continues working with republican Michele Bauman. This time on behalf of Yingling’s hand picked candidate Tom Maillard. On 3/21/22 Michele Bauman filed an objection against Terry Wilke’s petition signatures for the house Dist 62 race. This is the same office that Yingling’s candidate Tom Maillard is running for. If you’ve ever wondered why the Democratic party is so screwed up in Lake County this is why. Because we are the “big tent” Party anyone can just claim they are Democrats, waltz right in and sow all kinds of confusion and infighting.

Michele Bauman attempts yet more stalking and harassment. She has filed a complaint with the County’s Ethics Committee which was denied. She then posted a video online and with the discredited “watchdog” group wherein she admits to having a relationship with an individual in order to get “dirt” on Mr. Wilke. When that dirt never materialized she then took out the order of protection against this individual.  Then she attempted to take out an Order of Protection against the very object of her stalking, Mr. Wilke, which was also denied as having no merit.

Her harassment of Mr. Wilke at this point now includes several complaints each for the County Ethic’s Committee, the State’s Attorney, the 19th Circuit Court, the Attorney General and now the Round Lake Park police, all denied or dismissed based on the facts.

Michele Bauman was fine with an illicit relationship for months and she didn’t take out an order of protection until the relationship went public. However she is now claiming that she was the victim. I don’t know why she didn’t just say no in the beginning and instead let the relationship go on for months until it became public. I also don’t know why she would think this type of arraignment was ethical in any way, but there you go. She has publically confirmed the existence of the Order of Protection herself. Whether she was indeed the victim or he was, we may never know but either way it’s pretty reprehensible behavior from an elected official. So we’ll see if a copy is available and we’ll post it here.

Michele Bauman gets an order of protection… It looks like she tried to bribe a volunteer into giving her information on the former Supervisor in exchange for sex and/or money. Not at all different from her previous behavior.

We’ll update as soon as we have more information.

Michelle Bauman and Kristal Larson take over and redirect personal emails of former Supervisor, the Avon Cares charity and a former employee to themselves. God knows what they’re doing with those email accounts, we hope it’s nothing illegal or unsavory. Sam Yingling’s campaign workers continue to work at the township in continuation of pay-to-play politics as usual.

Michelle Bauman and Jeanne Kearby just passed a new budget that raises their running mate’s budget by 30% over the past two years. And tried to hide it by moving the assessors salary into the township budget. Now they are complaining that they will have to cut constituent services because there isn’t enough money in the township budget anymore.  Sam Yingling originally cut the budget in half, back when he was Supervisor. But now his group of stooges can’t afford to keep all of Sam’s campaign workers employed at the assessor’s office without taking it from constituent services. Life is hard eh?

Used over   (update May 2021) nearly $100,000 worth of taxpayer dollars on legal expenses for a crackpot political agenda without legal authority.

Lied to the public about reneging on agreements about repair of an abandoned house and purchase of vehicles for the Township.

Sabotaged a handicapped  bus shelter that PACE and the Township were planning for years.

Repeatedly violated the Prompt Payment Act, refusing to pay contractors who preformed work for the township.

Wasted tens of thousands of taxpayer dollars on conspiracy theories and investigations with the State’s Attorney, Attorney General and the Lake County Ethics committee, all of which turned out to be false.

Spent $30,000 in taxpayer dollars in a failed attempt to kick her opponents off the ballot.

Falsified meeting minutes and then destroyed the recordings to cover her tracks. Recordings are classified as public records.

Destruction of public records for political purposes is up to “Class 4 Felony” under the Illinois Criminal Code. “Any person who knowingly, without lawful authority and with the intent to defraud any party, public officer, or entity, alters, destroys, defaces, removes, or conceals any public record commits a Class 4 felony.”

Gave her position a 25% raise even though she has only been working a few hours a month for years.

Avon Township is a small township with a small tax levy. We just can’t afford any more crazy.